We love to walk to a meal. Those who read our blog at www.Girovaga.com know that we have made a habit of walking to lunch especially when traveling. Sometimes we walk miles to lunch.

This trip we have taken many paths to lunch but a couple of them were less-traditional. In fact, one was not a path at all, but a journey nonetheless.

Ivan and Sabina found the abandoned villa while walking in the woods. Lucky find.

High above the Italian town of Stresa on Lago Maggiore is a restaurant one could walk to, if one were about 30 years younger and in better condition than I am. I found out about Villa Pizzini thanks to this article in The Guardian. I figured it would kill Ric and me to take that hike: It is about 1300 meters/4265 feet in altitude gain. We opted for the much easier gondola from lakeside to the mountaintop.

One does not, however, simply exit the gondola and walk into the restaurant. Oh, no! It is a bit of a hike uphill, almost to the top of Monte Mottarone. Just when you think you have taken the wrong road, the driveway comes into sight. Then a descent through the woods e voila an elegant palazzo appears. We were warmly greeted by Ivan (whose English is not only better than my Italian, but it is also better than my English) and were ushered to the terrace for a glass of fine Arneis with a view of the lake.

Love the marble rests for flatware.

In the village they served pasta, lake fish, salads, panini. The usual suspects. Here the cuisine was beyond fine dining: An amuse bouche profiterole with gorgonzola cream and starters such as a perfectly poached egg with black truffles or my goat cheese and basil horn with sundried tomato mousse. We enjoyed entrees of a duck breast with orange mayonnaise for Ric and veal wrapped in a cabbage leaf and served with a pink peppercorn sauce, crispy polenta, and mushrooms gathered from their

Veal with crispy polenta, and mushrooms from their own foraging.

garden for me. Each course was paired precisely with a wine to bring out the best in the dish.

Arriving before our reservation at 13:00, we were shocked to be the only guests, however before we left there were 3 more tables of diners embarking on their own culinary adventures. You can walk in out of the woods and find a table, at least in the offseason.

Our hiking lunches are usually not so grand. This was the best lunch-while-traveling since we hiked the Gourmetweg in Zermatt a few years ago. Luckily my Fitbit recorded over 13,000 steps that day despite the use of the gondola.

A family strolls between two segments of the Ciclopedonale Maremonti.

We’ve visited and hiked the Cinque Terre four times: 2010, 2012, 2013, and 2014. Each year the little towns became more crowded to the point that we could hardly get on the trains by late afternoon some days in 2014. (See “The Silver Lining Trip”.) It looked like the Tokyo subway at rush hour.

After a four-year absence, we returned with thoughts of calm seas and amazing Ligurian cuisine. We cannot get fresh anchovies marinated in lemon nor octopus salad in Lincoln City. Nor trofie al pesto for that matter. However, we based ourselves in Camogli, a bit north of the five overcrowded villages and just south of Genoa.

Tunnel sections, interspersed with light, look like a cathedral.

It’s a great little town. Camogli gave us access to explore an entirely different part of the Ligurian Coast. We had only been as far north as Portofino before, and that was in 2012. (See “More Postcards from the Cinque Terre”.)

There are some very challenging hikes in this area, beyond what we are willing or able to do with cranky knees. But there are also some reasonable ones. The  Ciclopedonale Maremonti was carved out of an abandoned railway during the past decade. It is only about 6 km long and most of it is in tunnels, but it is flat, safe, and the vistas are lovely. It is perfect for a day that is rainy or hot and wonderful for children on bicycles. 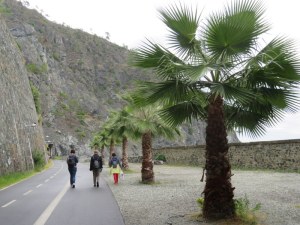 The day we went was overcast with a high probability of rain. Good day for tunnels, but at the end of the first section, we arrived in delightful Bonassola at just the right time for late morning coffee. (You know how we love a coffee stop when walking.) It was market day in Bonassola — and a Saturday — so particularly lively.

Part two of the trail brought us to Levanto, a larger town just north of the Cinque Terre.  This section of the trail was very busy with locals, where the first section we were almost alone. The locals were walking and chatting, some with shopping, some with children. Two fathers were teaching their children to skate.

As luck and good planning would have it, we arrived in Levanto at the perfect time for lunch, so it truly was a path to lunch.

In Bonassola, it was not exactly beach weather (although it would be the next several days), but the chairs were still deployed.

4 Responses to Path(s) to Lunch

This site uses Akismet to reduce spam. Learn how your comment data is processed.