While the Oregon Coast and Cascade range offer oodles of hiking options — you can hike the entire coast on the Oregon Coast Trail, for example — sometimes we need to stay closer to home but want to be out in the woods. This is especially true during tourist season when Highway 101 is clogged with motor homes and the beaches are flooded with sand pails and kite flyers. It can be challenging just to go to Safeway on a Friday during THE SEASON.

So we have been busy exploring some of the little walks nearby. The city has a number of trails nicely mapped-out. We have encountered surprisingly few people on these walks, even at the height of the season.

The Villages at Cascade Head are basically out our back door.  We frequently walk to the ocean at Roads End and loop back on city streets. It takes about 35 minutes on foot to get to the water. Also classified in The Villages is The Knoll, (see Out Our Back Door), a nice climb. It is a funny area, The Villages. It was a housing development that failed in 2008 before any houses were built. The city bought it and maintains it as park land. There is a paved road with sidewalks running through it for a half-mile or so but you can walk for miles.

The other day we were aimlessly walking in The Villages on the main road when we decided to explore some of the lesser-used trails. We had the thought that we could short-cut from one of the marked trails and circle back toward our house. Those trails marked on the map led to true deer paths. Or maybe elk paths. We saw scat everywhere and were in danger of getting lost in the woods about a kilometer from our house. Yeah, the forest is that dense.

I dread the day the city sells the property and allows a developer to build there.

On to a few more local walks.

One of the possible activities here is kayaking. Bring your own.

The Siletz Bay National Wildlife Refuge sports a new trail that opened this spring. While the wildlife refuge is very large and includes beaches along the bay, the trail is very short and suitable for small children and even baby strollers. There are a staggering number of birds that can be found in the refuge, and other wildlife as well. No dogs allowed! It only takes about 20 minutes to walk the trail but strung together with a few other walks (below), one can get a good half-day of walking in. 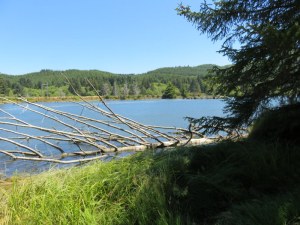 Siletz River runs into the bay and through the refuge. 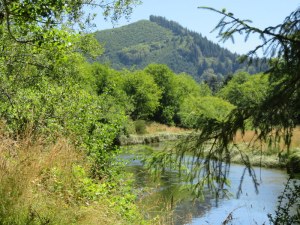 Regatta Grounds Park is a destination for people with small children due to the incredible playground there, but we enjoyed a 20-minute loop through the adjacent woods where we saw a 200-foot tall, 400-year-old Sitka spruce. Magnificent.

Another short walk is available at Friends of Wildwoods Open Space. The path traverses a wetland with little brooks running even after 6 weeks without measurable rain. Even on a July day, the woods were cool enough to require a jacket. This is a 35-minute trail, with no real destination. Just a pleasant ramble through woods. Watch for tripper roots, though. Oregon trees have shallow roots! 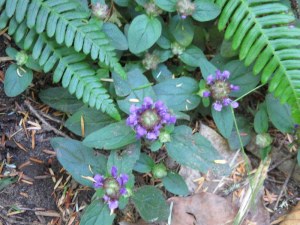 Woodland violets in Friends of WIldwoods. 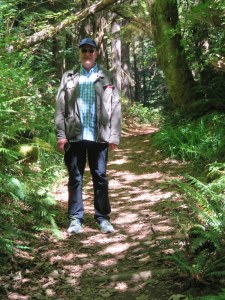 My hiking buddy in Friends of Wildwoods. Cool and damp even after weeks without rain.

Finally, the Spring Lake Trails offers more variety from a concrete paved walkway along the western boundary to some steeper sections near the lake. We have not fully explored this park yet and when we return we will bring our trekking sticks as there is some challenging footing and many roots to watch out for. Centered on a spring-fed lake, I have to believe there will be significant waterfowl to view later in the season.

We did not see a lot of wildlife, but this little squirrel was kind enough to pose.

Tripper roots abound. Really had to watch my step.

“Trees” growing from a fallen tree. The root system is onshore, the main trunk half submerged, and over the decades half-a-dozen branches have matured into tall trees themselves.

The trails give way to a lake, somewhat murky in late July and crossable via a narrow bridge.

Soon we hope to explore Drift Creek Falls and a few of the State parks along the coast. Stay tuned!

This site uses Akismet to reduce spam. Learn how your comment data is processed.